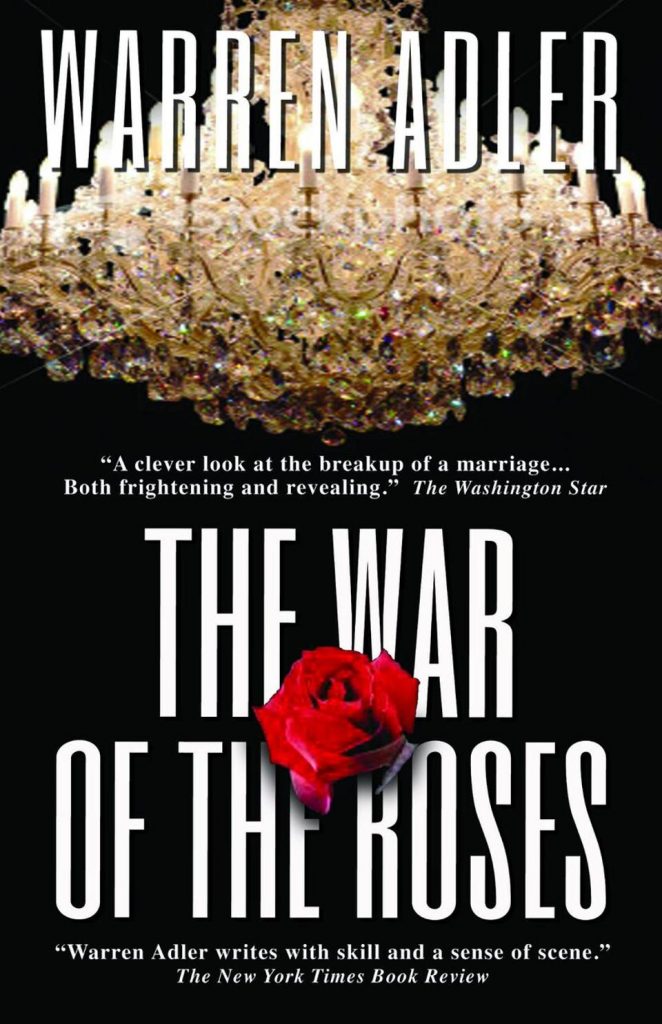 The War of the Roses:
Broadway Premiere Coming Soon 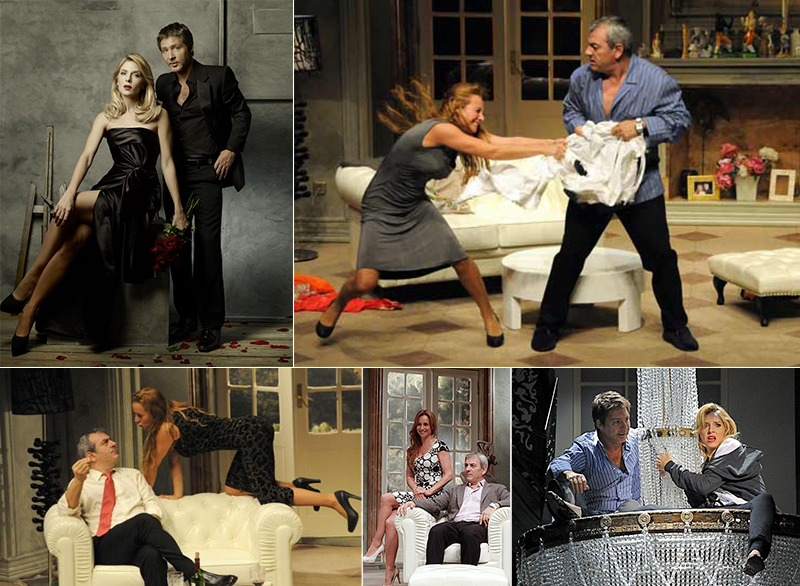 Jay and Cindy Gutterman are six-time Tony Award-nominated producers, winning three times; once this season with their producing partner Cathy Chernoff for “All the Way” starring Bryan Cranston, directed by Bill Rauch, and previously for both “Spring Awakening,” directed by Michael Mayer, and “Glengarry Glen Ross”, starring Alan Alda and Live Schreiber, directed by Joe Mantello.

THE WAR OF THE ROSES follows the explosive chandelier shattering storyline of Barbara and Jonathan Rose’s confrontational filled divorce drama gone terribly wrong. THE WAR OF THE ROSES is a clever dark comedy about the breakup of a marriage which leads to the ugliest divorce imaginable, one that is both frightening and revealing.

The stage version of the iconic novel-turned film, The War of the Roses, follows the legendary Jonathan and Barbara Rose as their seemingly perfect marriage devolves into a “deadly search and destroy mission” for each other’s most prized possessions. Adapted by Warren Adler from his novel, the play has a distinct identity from the dark comedy blockbuster hit starring Michael Douglas, Kathleen Turner and Danny DeVito. The War of the Roses has opened to ‘sold-out’ shows and spectacular reviews in foreign language translations internationally. The global impact of this cautionary tale about the perils of divorce has not only proliferated across media, but it has also entered the Zeitgeist and morphed into the nomenclature of divorce, where the phrase ‘The War of the Roses’ is now the recognized metaphor for a contentious divorce. Watch this “nasty and amusing battle of the sexes” come alive on the stage. 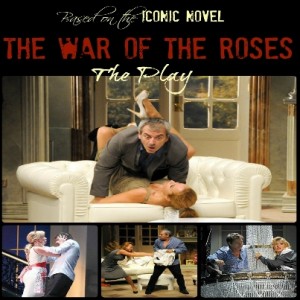 The War of the Roses:
An International Stage Hit

“… an intelligent, stark comedy with an evil smile…. invites us to reflect on the nature of relationships in modern society.”
– Teleprenza on the Spanish premiere of the play

The stage version based on the original novel. The international hit, now available for production in English. Preview the script and watch clips from international productions.

Audiences Worldwide Love The War of the Roses

International Productions of The War of the Roses

Warren Adler’s stage version, based on his iconic novel, continues to be produced internationally, reaching audiences in Spain, Italy, Germany, Denmark, Hungary, Prague, Norway, Iceland, Argentina, Chile, Brazil, Uruguay, and soon to be premiering in Mexico and many more countries. 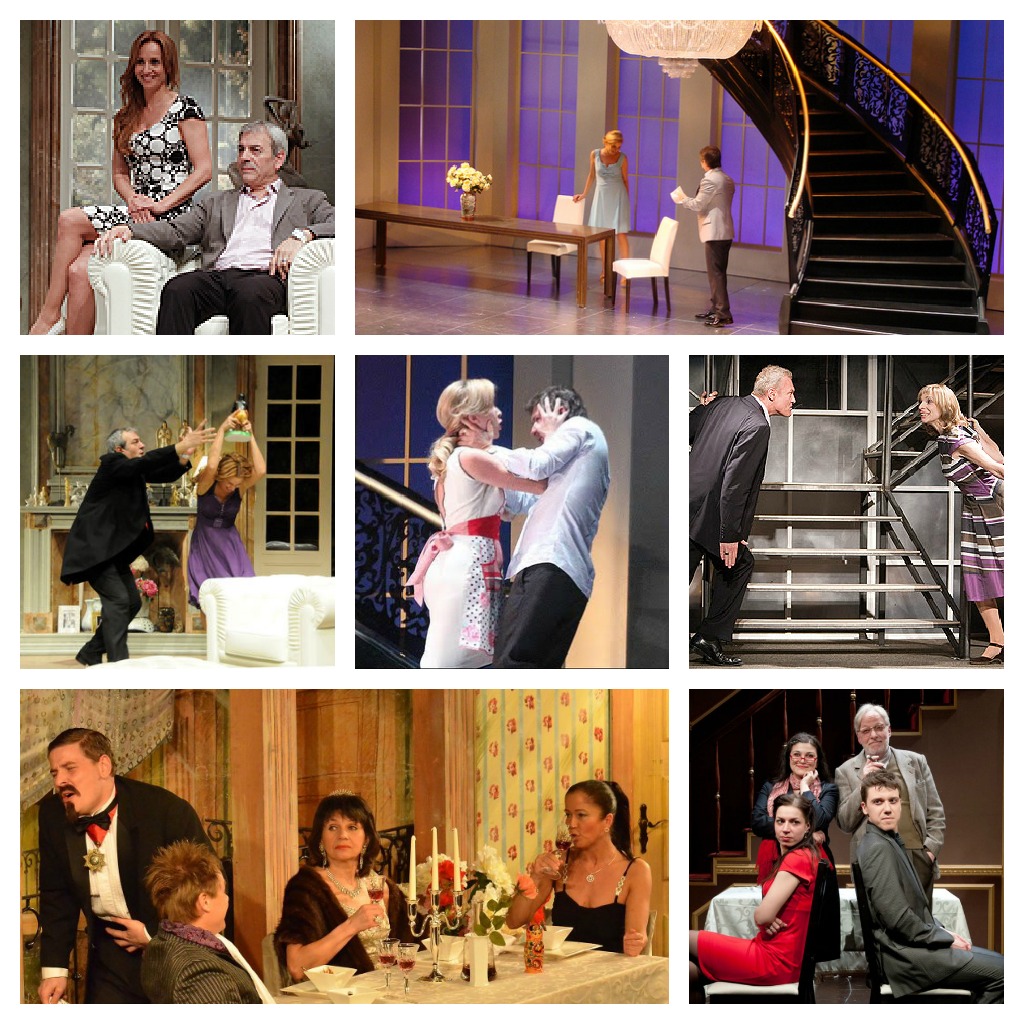 “… an intelligent, stark comedy, with an evil smile… invites us to reflect on the nature of relationships in modern society.” – Teleprenza on the premiere at the Teatro Belles Artes, Madrid

Full House at The War of the Roses Dress Rehearsal!
“The dress rehearsal of the theatrical adaption of The War of the Roses was completely filled…. Barely 15 minutes after the opening of the box office, those seeking to enjoy this performance filled Sarobe to capacity.” — El Commercio

The End Of Marriage, With Humor.
“A poignant and humorous tale about the institution of marriage and a reflection on relationships. (…) A delight! (…) El Teatro Principal welcomes the national premiere of The War of the Roses with great success.” — El Pais

“Do not miss this hilarious drama starring beloved television host Carlos Sobera and Mar Regueras that comes to Madrid after a successful tour through the theaters in Spain. The War of the Roses pointedly illustrates the fine line that separates unconditional love from mortal hatred…. a great set design enabled the full display of disaster.” — La Opinion de Malaga 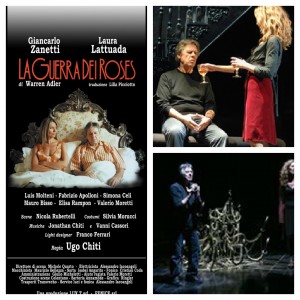 “Adler’s interpretation of the show has a separate identity from the film. The pace is fast and intense depicting a true comedy and the two actors were exemplary (…) a full house at the world premiere of the show. A long applause revived an encore of the finale.” — L’Adige

“The War of the Roses by Warren Adler is a mechanism so perfectly balanced that one wonders if it could have been a wager placed by the author….” — La Nuova Sardegna

The resounding applause was well deserved for this interpretation of The War of the Roses by Ugo Chiti. The two actors were always in perfect harmony and perfectly expressed an intriguing story of psychological depth. The show has great creative force and a robust character.” – La Sicilia

“A wonderful cast for an amazing comedy (…) flawlessly unravels marriage clichés. This play is not an adaptation of the film version of The War of the Roses. Warren Adler freshly created the text for the play and developed the dramatic structure without reducing it, thereby creating a perfect mechanism specifically for the theater (…). The cast of actors just perfect, the scene design, created by Nicola Rubertelli, is elegant and imposing and the show directed by a meticulous and accurate Ugo Chiti have created a project that has been very successful for the last two years.” — Corriere della Sera

“The applause confirms the success of the The War of the Roses directed by Giancarlo Zanetti. The public appreciates this theatrical adaptation made by author of the novel of the famous film.” — La Repubblica 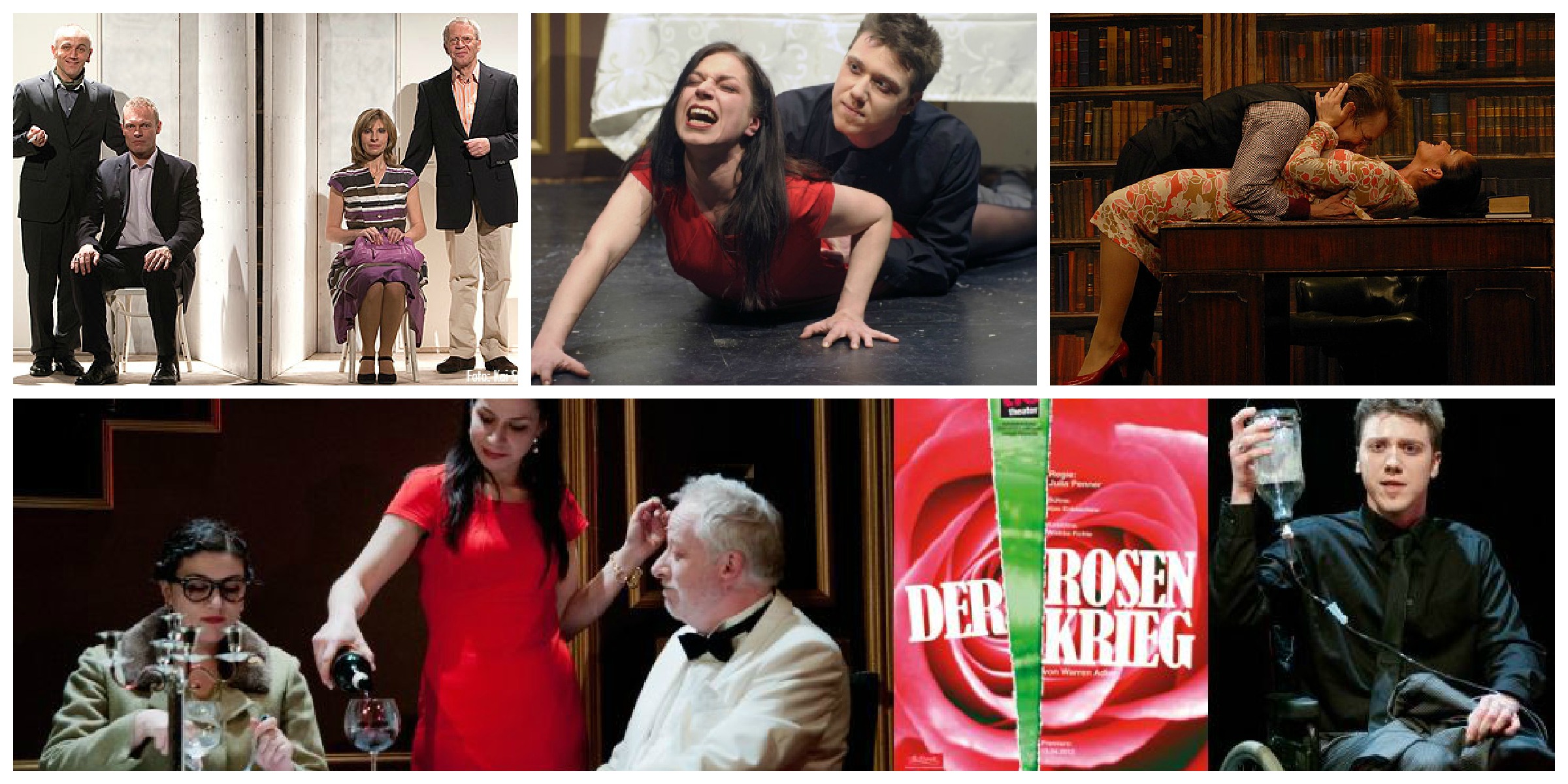 “The spectacular slugfest works well on the stage, as do the legendary vulgarities of the Roses. The War of the Roses at TiC disappointed no book or movie fans- including those who still believe that words like “struggle” and “battles” have only figurative meaning when it comes to marital problems…” — Cronenberger Woche TIC Theater Wuppertal

“Susann Fabiero as Barbara Rose (…) revolts against marital ennui. A deserved applause in what was a ‘sold-out’ premiere anyway” — General Anzieger Online

With a lot of dark humor director Julia Penner presents the staging of Warren Adler’s novel The War of the Roses. Fans on the film version can look forward to a successful bond. (…) a sold-out show on Borner street and an enthusiastic applause with bravos all around.” — Westdeutsche Zeitung TIC Theater Wuppertal

“Wit and Brilliance (…) The War of the Roses with Martin Semmelrogge at Comoedienhaus is a complete success (…) An exciting trip to the theatre! – Hanauer Anzeiger

“A resounding applause for the grand premiere of The War of the Roses!” — Bonner Rundschau

“A vicious, nasty and amusing battle of the sexes!” – Express

“A turbulent comedy full of sarcasm and meanness.” – Expre 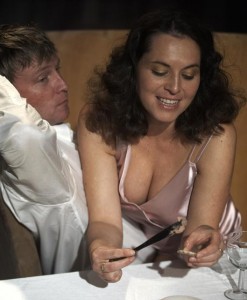 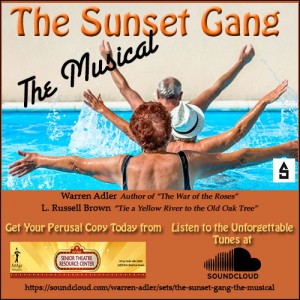 “…a bittersweet musical about aging and desire… a deeper examination of love and loyalty among people over 60.”
– New York Times on the Off Broadway premiere of the musical

With time running short, these intrepid residents of Sunset Village in Florida continue to thirst for life and love. “The Sunset Gang” premiered off-Broadway at The Jewish Repertory Theatre in 1991. Listen to the music of The Sunset Gang, and request a preview of the script.

The Sunset Gang – the musical, adapted from a series of heartwarming short stories narrating the joys and pains of old age through humor, mystery and romance. The stories telling of a retirement village in Florida were adapted for PBS’ American Playhouse Series starring Uta Hagen, Harold Gould, Jerry Stiller, Ron Rifkin and Doris Roberts who earned an Emmy nomination in the Best Supporting Actress category. The Sunset Gang received an off-Broadway production with music composed by noted composer L. Russell Brown (“Tie a Yellow Ribbon Round the Old Oak Tree”, “C’Mon Marianne” Jersey Boys) and lyrics by Adler himself. The New York Times called it, “…a bittersweet musical about aging and desire… a deeper examination of love and loyalty among people over 60.” The Wall Street Journal said, “Those… stories… are in fact, pure drama – moving, comical, and most of all, sharply observed.” Listen to the music from the The Sunset Gang here: 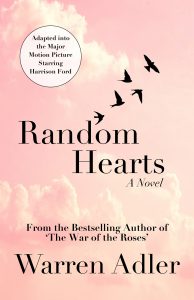 In an ideal world, they never would have met. Vivien Simpson is a happy stay-at-home mom with a young son who adores her successful husband. Edward Davis is an ambitious aide to an important Congressman who loves his wife. When a plane crash brings about the discovery that their supposedly loving and now deceased spouses were entangled in a deeply passionate love affair, they are devastated and baffled by the revelation. Determined to pick up the pieces of their shattered lives, they embark on a hunt for the truth behind their spouses’ infidelity, guided only by the two mysterious identical keys they left behind. Along the way what they discover about themselves and the mysterious nature of love will render audiencess breathless. 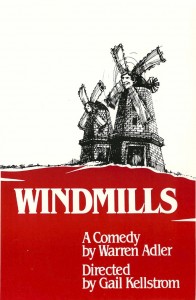 “Windmills”, a comedy by Warren Adler premiered at BTA Theatre
– Theatre Row, in New York in 1981. It was directed by Gail Kellstrom and produced by John Patrick Shanley.

Windmills, a comedy by Warren Adler premiered at BTA Theatre-Theatre Row, in New York in 1981. It was directed by Gail Kellstrom and produced by John Patrick Shanley.

Read a Preview of the script here: Windmills.

A Play in Two Acts

INTERN (Molly) – 21, White House intern to the President of the United States of America, spirited, youthful.

PRESIDENT’S WIFE (Jill) – Late 40’s, blonde, fiercely ambitious in both her marriage and politics, she has retained her “college sweetheart” attractiveness.

Read a Preview of the Script: Libido

Dead in the Water

Years ago, two dreamers took the plunge and got married. Now the marriage is sinking fast, and only taking the plunge again will make it better. But who will go first?

A Play in Two Acts

Read a Preview of the Script: Dead in the Water