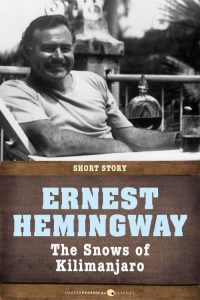 “Kilimanjaro is a snow covered mountain 19,710 feet high and is said to be the highest mountain in Africa. Its western summit is called the Masai ‘Ngaje Ngbi’, the House of God. Close to its summit there is the dried and frozen carcass of a leopard. No one has explained what the leopard was seeking at that altitude.” -“The Snows of Kilimanjaro” by Ernest Hemingway

In the epigraph of my novel Private Lies, I got permission from Ernest Hemingway’s heirs to use a quote from his story “The Snows of Kilimanjaro.” It describes finding the dried and frozen carcass of a leopard on the western summit of Mount Kilimanjaro. The short story is about a writer who has traded in his creative skills for a life of travel, luxury, and ease, having married a very rich woman who can afford to provide him with these so-called comforts and adventures. The writer is dying of blood poisoning and reflecting on his life – he is filled with despair at having traded his creative talent for the life his wife’s money can provide.

The metaphor struck me as painfully clear. He is the leopard who has strayed too far and because of this lack of direction will die frozen and alone near the summit of the mountain. I have often, quite often, in fact, thought about this Hemingway story and this reference to that wayward leopard. 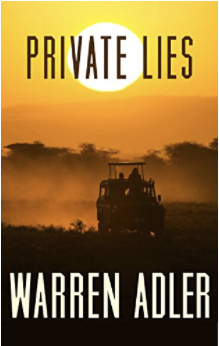 I have been reading and re-reading Hemingway’s short stories since I was seventeen years old. I did not think of using that epigraph until I conceived the book Private Lies in which the major action takes place on a safari in Kenya. I chose that epigraph because at the time it seemed to mirror what I had in mind for my novel about people who were not being faithful to each other or to themselves.

It speaks to every creative artist in whatever realm who abandons her or his “calling” for the alleged comforts of luxury and ease. To sustain ourselves and continue to write we must believe in our talent and the intrinsic worth of our work. This requires an unshakable belief that the writing is worth exerting the creative energy required for its composition.

Stay the course. Never abandon your calling. I strived to never allow myself to take rejection as anything but a contrary opinion that is usually wrong. You have to will yourself not to allow self-doubt to cripple you. I knew I wanted to be a writer since I was sixteen. Writing, or any other brand of artistry, requires not only total focus but concentration, often isolation. Writing has always been a hunger. An obsessive need. It’s a need that can’t be measured by the metric of worldly success or celebrity. It’s not simply a conscious act of discipline and will. My dream is an ever-evolving creature.

What is sacrificed in the effort to reach the top of the mountain? My wife, my children, all knew the nature of my dream. I spent long hours in my writing space. There were moments when my wife, while she was editor of her magazine, insisted that I write something she needed. She was focused on her own dream and would brook no resistance and I complied as best I could, proud of her ambition and activity. I made sure I was available to them when needed.

To this day, I feel I have pursued my journey because I had to. It was always my number one priority and everyone around me knew it. I did my duties as a husband and a father and provided for my family. I have no regrets.

Ambition is a double-edged sword. It means being motivated to achieve some imagined goal. For many, it is a singleness of purpose to achieve riches or power or serving others like helping the poor or widows and orphans. Ambition for me has always meant writing works of the imagination and I have achieved that purpose.

As for me, I’ll keep climbing…