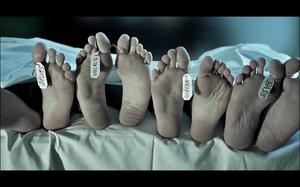 Never before in a lifetime spent as a media hound and news junkie have I noted, with dismay, the amount of ink and digital bytes spent on documenting and numerically recording body counts.

At times, it seems as if the news has morphed into some kind of a computer game where the number of killings are posted to determine a winner by lives lost by gunshot or butchery. Worse, such events are becoming so commonplace that they seem to invoke, by repetition, more indifference, boredom and ennui than outrage. They are viewed perhaps, as a mere computer game come to life, unreal and emotionally disengaging except to tote up figures.

We get endless updates spewing specific numbers. 203 killed in Syria, 106 killed in Mali, 37 killed in Pakistan, 15 killed in the Sinai, 43 killed in Afghanistan, 27 killed in India, and hundreds killed in places we have never studied in our high school geography books. It goes on and on. In the mind’s eye we are treated to an endless global river of blood.

Many are slaughtered by bombs exploded by religious zealots, intended especially for crowded places where people congregate; buses, subways, marketplaces, houses of worship, college classrooms, movie theaters, the idea being to kill as many people as possible.

While we might think of it as a global phenomenon, we have recently been subjected to such horror in our own country, where mentally disturbed young men have become mass killers. When such monstrous events occur so close to home, we are admittedly more emotionally involved and open to questions about our own society and environment. Even so, we seem to acquire an air of futility and indifference about such events, and throw up our hands in frustration soon after their occurrence.

Perhaps there is an element of hypocrisy in how we view these tragic and preposterous events when they happen far away. Indeed, it never ceases to amaze me why fundamentalist Islamists who disagree on religious grounds can bring themselves to butcher each other in the name of ancient differences. In contemporary terms, these brutal and bloody antagonisms between Shiites and Sunnis dominate the killing news, but of course, such differences also apply to other religions. Can we call perpetrators of such attacks mentally disturbed as well?

What is one to think when people whose beliefs are enshrined in a single book kill each other based upon differing interpretations? In fact, the killings are so cruel, so brutal and appalling that one comes away from the information stunned, confused, and eventually, uninvolved emotionally. Just consider the way victims are typically dispatched; rape, stonings, lashings, beheadings, and other abhorrent methods of swift and slow death.

How is such cruelty justified? What makes one resort to such savagery towards another where there should actually be an affinity among followers of a single religion?

Similarly, what is one to think when leaders of nations, accredited and bona fide nations that are members of the UN, threaten to wipe other UN colleague nations off the face of the earth? Is this acceptable conduct for those countries that share our planet? Such threatening comments are beyond logic and far outside the realm of civilized discussion.

Still it goes on, the talk, the anger, the hatred and the never-ending casualty lists that dominate the media. Sometimes it seems that we are living in a human abattoir; slaughter so commonplace that we hear the cries of pain and agony as if it were background music pumped in by Muzak.

We get heartbreaking pictures of babies dying of starvation in crowded filthy refugee camps. We get endless pictures of families fleeing armies of gunslingers intent on killing, rape, pillage and burning. We are so inundated with horror that even the death count caused by famine, floods, forest fires, earthquakes and other natural disasters move us only briefly, then we pass on to other matters.

At times, it doesn’t seem to penetrate that these killings happen to real people who bear real excruciating pain and unbearable anguish for reasons that, in most cases, cannot be justified. Yes, there are voices raised against these acts of mindless carnage, but their sound is muted. The mad bloodthirsty perpetrators do not hear, and apparently, do not feel the slightest guilt or compassion for their victims.

It seems, at times, that the mechanisms once set up with the great hope that they would civilize us appear to have broken down, and one is tempted to disengage ourselves from countries, organizations and individuals that would push us back to unenlightened monstrosities of the middle ages. Perhaps it will come to that. Or should.

I don’t claim any moral superiority on this issue and we would be fools to place a dark curtain over these events. The media, after all, must be true to its mission of transparency and exposure. But as we turn our eyes and ears away from the terrible fault lines of our species, it might be well to remember that immortal line from Pogo, “We have met the enemy and he is us”.

No Escape From the Huckster
The Enemy Within
Coming Solo