Today we are shining the spotlight on Lillian Yves, the incredibly talented narrator who narrated two Fiona Fitzgerald mystery novels: American Sextet and The Ties That Bind.

What initially drew you to narrate two of Warren Adler’s Fiona Fitzgerald mysteries? Is there a particular genre you gravitate towards?

Fiona is a strong female lead and we are close in age. What girl doesn’t want to play a detective and be the lead of a crime drama? It was an opportunity I couldn’t resist. Lately I have been doing a lot of romance and historical novels. I have to admit it, I am sucker for love stories.

How did you specifically prepare The Ties That Bind? And American Sextet?

First thing I always do is read the entire novel. I need to know if there are particular accents or if I can give a character one. In American Sextet, I made the choice to make Jason’s editor (Webster) a New Yorker—he just came across that way to me. Also if there are places or words I need to look up a specific pronunciation of, things like that.

What did you take away from The Ties That Bind?

The Ties That Bind was an emotional roller coaster ride! Not only is Fiona investigating a sexual act gone deathly wrong, she is remembering her own personal trauma she went through that is extremely similar to the victim. I took away a lot of healing and emotional strength from this one. You really hurt with Fiona and struggle with her to see if you gets the justice she deserves.

Is there anything you learned about yourself or life in general after completing the production of The Ties That Bind? American Sextet?

They made me look at the news differently. The kind of crimes Fiona investigates are not always the kind that would make the news, they would be covered up and tucked away.

What did you like most about Fiona Fitzgerald? Can you relate to her?

She is female in a male’s world. You see how she can get pushed around and how she stands up to it. There is scene in American Sextet where it becomes vital that she notices that some clothes in a drawer are much larger than they should be. That is definitely something a gal would pick up on right away. A long time ago, I was the only girl who worked in a warehouse full of men—I completely relate.

What were some of the joys and challenges of narrating the Fiona Fitzgerald mysteries?

When, In The Ties That Bind, I had to narrate Fiona’s horrendous crime happening to her. I had to prepare myself for what I was going to say, (because you are also voicing the monster of this scene as well) and afterwards, spent sometime in the shower to wash that scene away. As for joys, I loved the character of Dorothy in American Sextet. She was something so wonderful and so true to herself, she was the brightest part of that novel.

How do the two books differ?

American Sextet did something that was really fascinating. Chapter by chapter you go between Fiona and her investigation and the antagonist, Jason. His story line is a little behind Fiona’s so you really hold you breath, not wanting the two timelines to meet. Dreading it really. In The Ties The Bind, the crime was personal for Fiona. Part of her had been broken for a long time because of what happened.

The chance to narrate. As an actor, when you get to not only read one character but ALL the characters—it is something so magical and I am also thrilled and charmed by the experience.

Do you have any rituals you practice while you’re recording an audiobook? Certain foods you’ll eat or stay away from? How do you take care of your voice?

When I was in school I had a voice teacher that had us always say the opening paragraph to Lolita—saying it is was the best way to warm up the voice. I do it every time. I also sing a little, wanting to warm the voice up in all octaves since different characters are going to talk in different places/voices.

I stay away from ice water, really gets the saliva going, as does dairy. I normally only have black coffee. I tend to record before I eat as well. As for voice care, if my allergies are kicking in and I am sounding scratchy, I do honey and tea.

What was the most unexpected thing about narrating audiobooks that you didn’t foresee going in?

I had no idea how much I would enjoy voicing the villain. It almost scares me. I have been an evil queen, a serial killer, a twisted British gentleman who has fallen, a newspaper reporter who has twisted what would make a great story, a spy working with Nazis…I enjoy those characters more than I should.

What’s next for you? Do you have a project you’re itching to work on?

I just finished a 1940s Gothic paranormal mystery, and I am currently narrating a paranormal romance in the regency period and they are delicious. And I am working on a time travel romance series. I am so thrilled to be working with each of these authors! Beyond charmed.

I do want to say that who I am working for and what I am doing would not have been possible without Warren Adler. He took a relatively new narrator and elevated me to a whole new level. He also expanded my vocabulary beyond measure. The words he uses, so amazing. After I worked for Warren, I have not had gaps in my employment.

Listen to Lillian narrate American Sextet and The Ties That Bind.

Lillian Yves grew up in Oklahoma, went to school in New York City and now lives and works in Los Angeles. She is a graduate of the American Musical and Dramatic Academy for musical theater. She currently teaches theater as part of an after school program, performs in a dinner theater weekly and does play readings throughout Los Angeles. She also writes under the name LeeAnne Hansen and has just released Hereafter, the second book in her Southern Haunting series. When her schedule is free she has plans to narrate that novel. For more information on her as a narrator or writer, or to contact her visit www.leeannehansenbooks.com 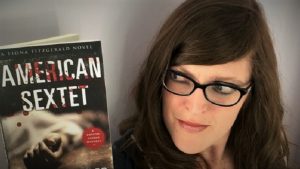